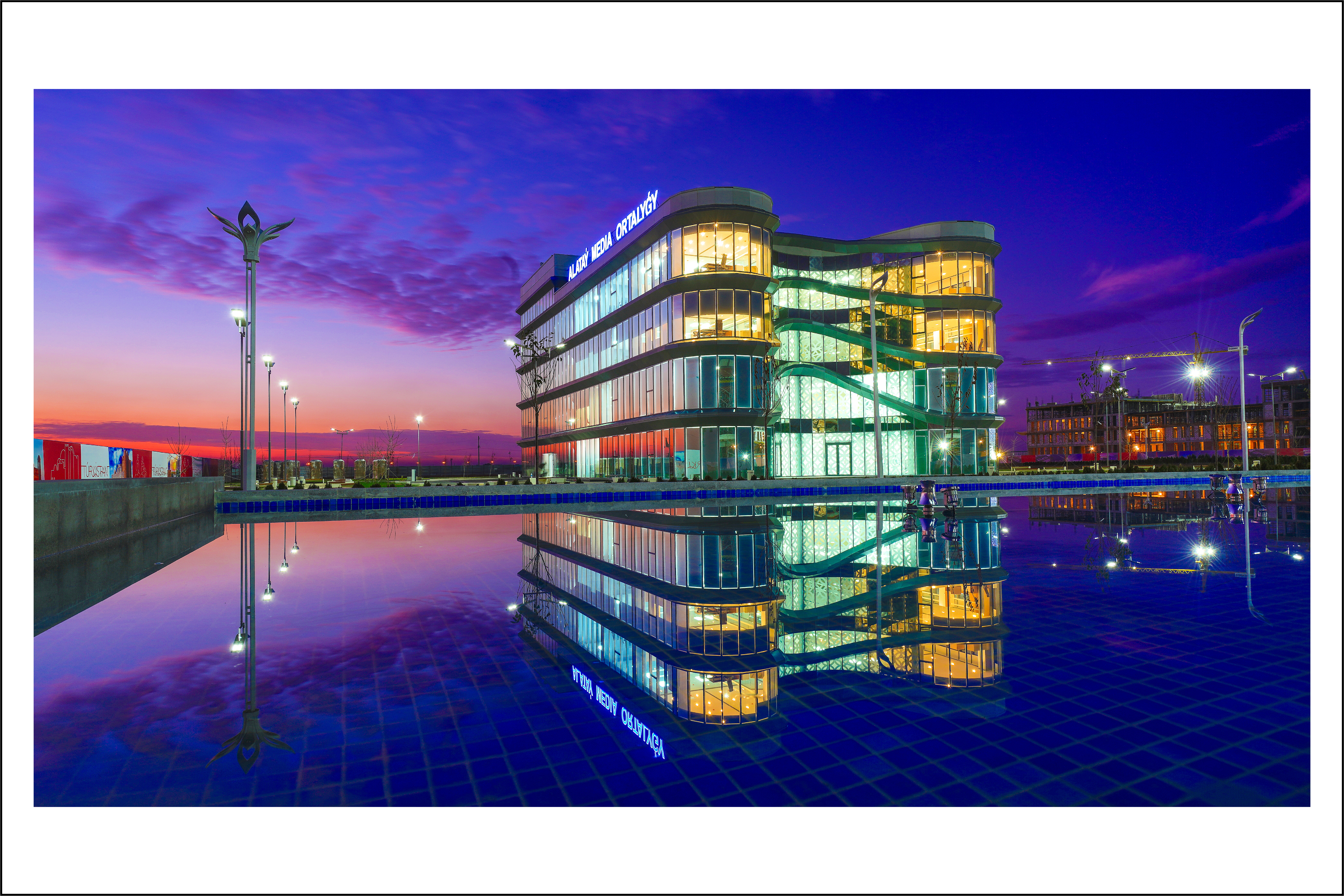 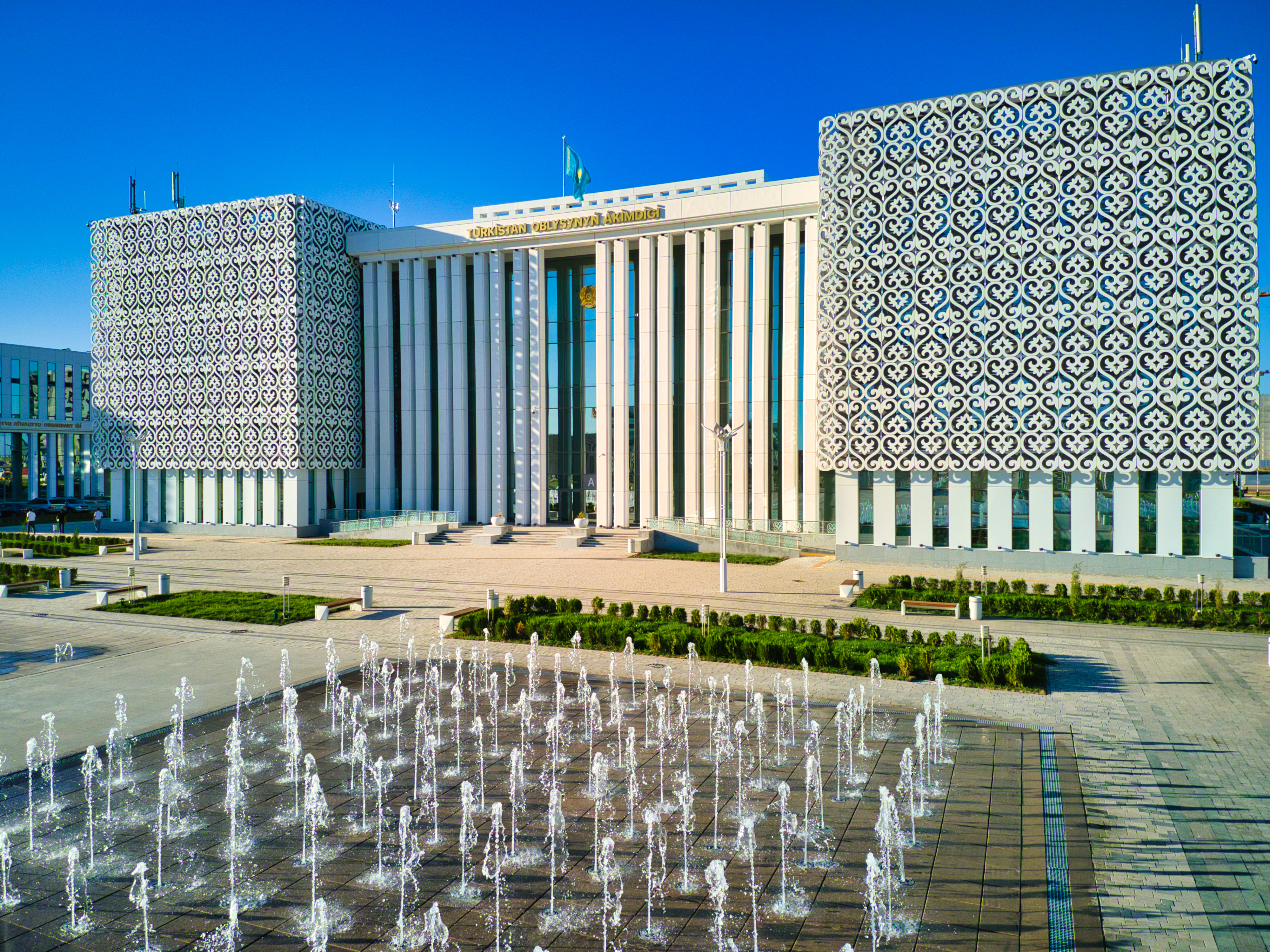 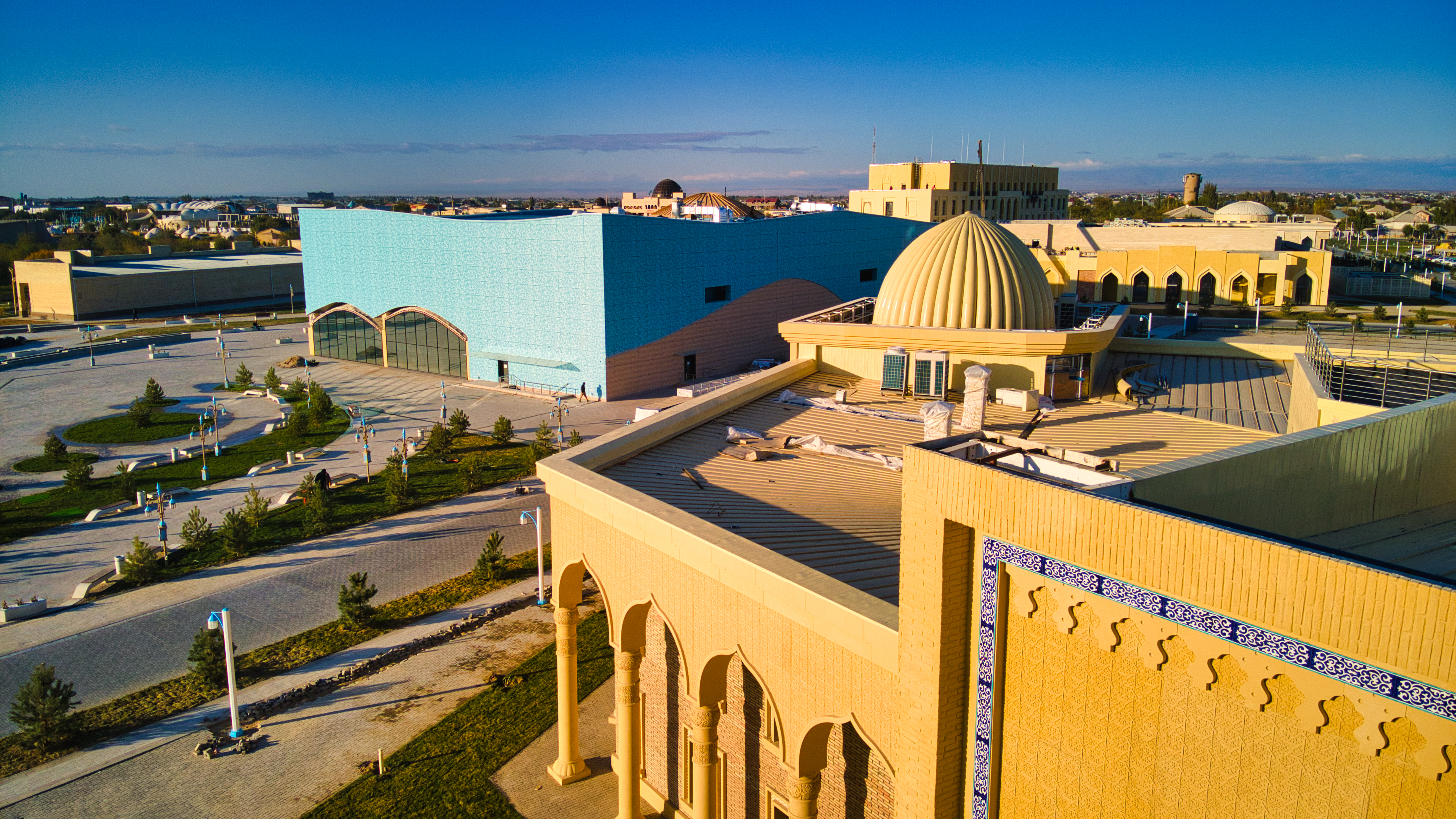 The spiritual capital of Kazakhstan has been rapidly transformed. Significant objects of the regional center were erected by the BI Group holding.

These are the regional akimat, the building of territorial bodies and treasury, a media center, the Hampton by Hilton Turkistan hotel and other objects that have become the architectural pearl of the city. All objects combine national flavor, modern technologies and climate features of the southern region.

One of the features of the building of the regional akim's office is a double facade - a facing system of HPL panels in combination with decorative panels made of fiber-reinforced concrete. These elements serve as a decorative function and create a shading effect from the sun's rays.

An additional microclimate is created by landscaping, landscaping and a fountain complex.

Conference rooms are equipped with “smart” supply and exhaust systems (systems automatically regulate the fresh air flow depending on the number of people using “presence sensors”).

Another way to save energy is the use of solar-powered LED street lights.

Despite the pandemic, the number of tourists, both from near and far abroad, who want to visit the spiritual capital of Kazakhstan, is growing. Hampton by Hilton Turkistan is waiting for guests. This is the first hotel in the city to be built to international Hilton standards. At the same time, the architecture and design are developed taking into account the specifics of the region and the best representation of the history and culture of the country.

Among the new attractions, it is certainly worth noting the Uly Dala Eli Center, aimed at popularizing the national brand “Country of the Great Steppe”. Here, an interesting design solution is porcelain stoneware floors imitated by black marble with inlaid porcelain stoneware under onyx in the form of branched roots of the art object "Baiterek Tree". Wall bas-relief in the form of a rock stone. The installed glass bridge 12 m long in the Elbasy Hall above the map of Kazakhstan deserves special attention. The heart of the Center will be the Turkic Hall, in which a projection sphere 14 meters high and up to 11 meters in radius was created to immerse the visitor in historical plots in 3D format.

“Nur-Sultan” Square is an example of the modern style of creating open public spaces. The pride of the object is a complex of fountains with an area of 3500 m². It is the largest pedestrian fountain in the world with a unique water choreography: game of geysers, water mirror, fogging, starry sky.

The new drama theater, designed for 510 spectators, is called the Temple of Culture. The theater is equipped with everything necessary for the work of the team. There is everything here, even showers. With its originality and grace, the theater conveys the spirit of the great history of the Kazakh steppes. It is visually easily perceived and remembered, therefore it can become one of the most recognizable theaters in the country.

The new stadium with 7000 seats has received the right to host International tournaments and training sessions in athletics in accordance with the IAAF regulations. In addition, there are premises for training in other sports: wrestling, acrobatics, gymnastics, boxing, weightlifting. The stadium is multifunctional, equipped with a modern multimedia system.

Of course, the new media center is of great interest to media representatives and bloggers.

The four-storey complex is equipped with the latest technology. 256 people can work comfortably here. The first two floors will be occupied by the future Turkestan TV channel.

There are three television studios, a virtual graphics studio, an on-air control room, three hardware-studio blocks, and four editing stations. Plus there is a radio studio. The third and fourth floors will house the editorial offices of newspapers and online publications. A regional CCS (Central Communications Service) will operate on the basis of the media center. For these purposes, a press room with a capacity of 30 people has been organized.

According to the plan, the new Turkestan TV channel will begin broadcasting on March 22, 2021. The new media will not experience a shortage of content. The new regional center is experiencing a boom in development and, in fact, a second rebirth. We are proud that BI Group is contributing to the formation of a new image of ancient Turkestan.