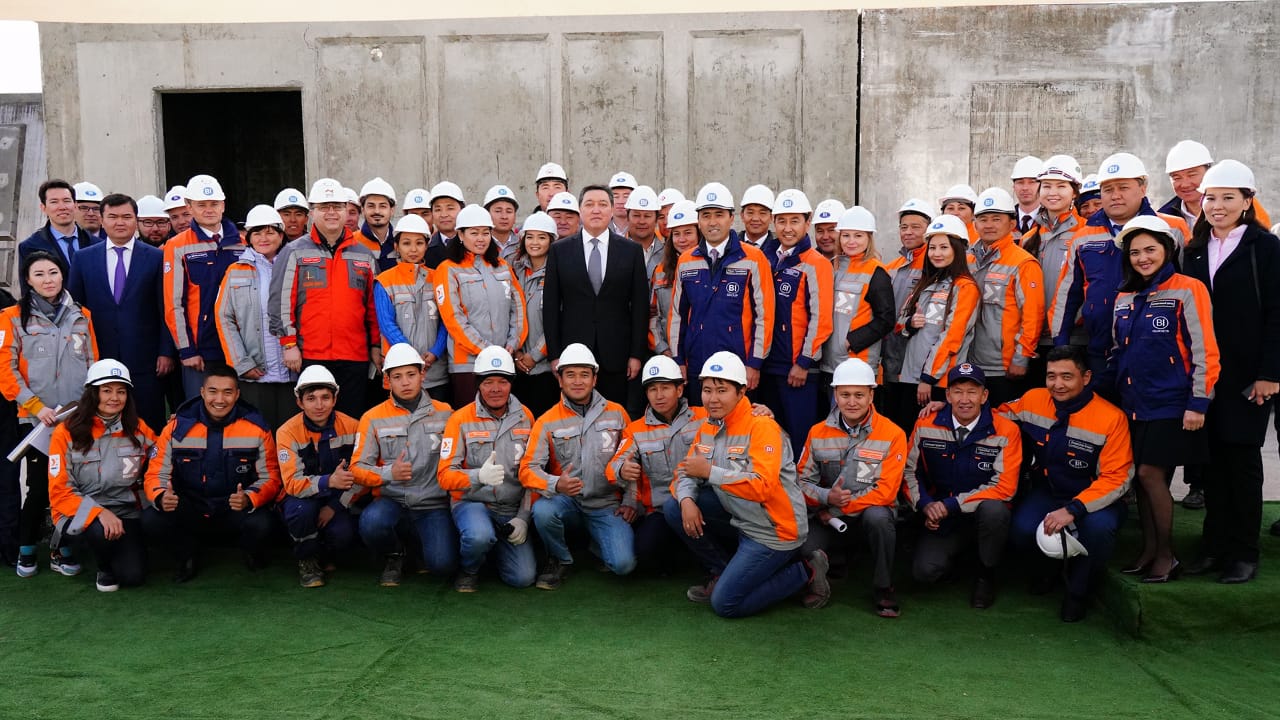 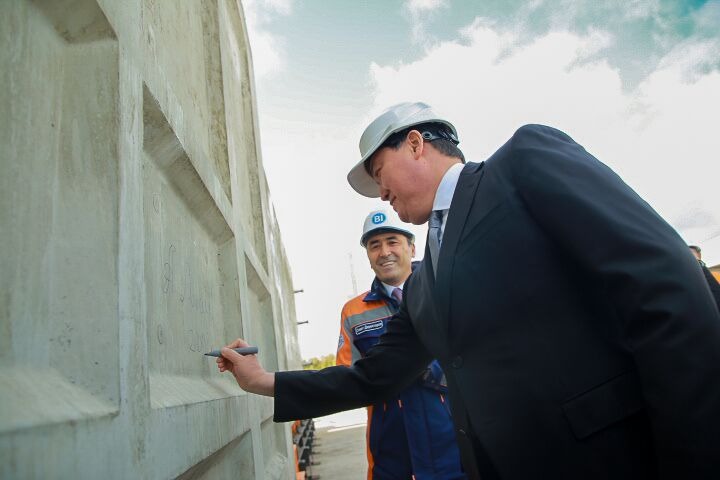 On September 02, Prime Minister of Republic of Kazakhstan Askar Mamin was involved in filling and extraction of the first modular building unit, thus kicking start to the product release at the factory of new generation ModeX, built by BI Group holding. Now therefore, for the first time in Kazakhstan industrial modular house-building technology was implemented, which will allow to reduce construction terms in four times, thereby significantly decreasing the residential property cost and at the same time to raise its quality – it will radically change the residential property field of republic, making it more affordable for all levels of population.
«It is an important step to develop innovations in construction field. The market demands new approaches. I believe, that BI Group has taken a momentous step. Firstly, we improve produce-ability, and the market will get a high-quality product. Secondly, we put the task for the company to reduce per square meter price in order to make residential property more affordable for all levels of population. Currently construction is the most dynamically developing field. I congratulate the factory personnel with release of the first modular building unit and wish successful implementation of the project!» –addressed Prime Minister of Kazakhstan to builders.
As of today modular house-building is one of the most efficient construction technologies. Its implementation is actually an industrial house-building revolution in our country. For example, 16-storey fine finish house with one entrance will be built for 3-4 months, while the terms when using customary technologies vary between 14 and 18 months. One store may be built for one day by building crew consisting of 6-8 workers. Today the crew consists of 100 specialists.
«All production is performed in the factory floor – from filling of concrete and claydite modules to fine finish of rooms. Modular units are almost ready rooms with windows, facade, sanitary ware, stained paper, laminated flooring and elements of utility services – pipes and electrical installation. Finish varies based on residential property class. Modules, completed at the factory, are delivered to construction site and assembled into a whole. It never happened in Kazakhstan before. There will be no customary «dirty» works at the construction site, environmental compatibility and mobility will raise. Actually we will assemble building out of finished modules as constructor kits. It will afford to build houses very rapidly and quality will be high due to factory control and certification. Actually, modules will be casted on conveyor, that will afford to reach completely naked walls, and does not require plastor works, improve noise prevention features», – explained director of the factory Kairat Kaskanov.
First production stage will be commissioned in February 2020, its capacity amounts in 200 thousand square meters per year, about 200 person will be employed. Totally it is planned to build three stages with 470 thousand square meters per year in total project capacity (second stage will be started in 2020, third - in 2021). About 741 workplace will be created at the enterprise. Dual education system is stipulated for personnel training.
About 10 billion tenge is invested in construction and start-up of the first stage of ModeX factory, whereof 6.5 billion are deposits by customers of «ATF Bank» second-tier bank at 14% per annum, whereof 8% are compensated by Damu Entrepreneurship Fund in order to support development of national manufacture.
To reduce time necessary to new technology in Kazakhstan, project team began to produce modular units prior to completion of the first stage construction.
«Modern world, global economy are developing rapidly. So we have taken decision to begin release of prefab-production on the sidelines of factory construction. We have already began to build the first 16-storey comfort-class house according to this method in the apartment complex «7Я». There are from one-roomed apartments, 38-40 square meters in area to three-roomed apartments, 80 square meters in area. The ceiling is 2.7 meter height. First module, which was released today, will be installed in 2 weeks on the prepared basement storey of the future house», – stated the chairman of BI Group Board of Directors Aidyn Rakhimbayev.
This industrial modular house-building also has both significant quality and economic advantages. High environmental compatibility is achieved due to use of haydite compression and conduct of «dirty» works directly at the factory floor. Qualitative indicators of heat and noise prevention features (57 decibel, against 52 decibel, provided for by state standards of SNiP) are achieved with the use of double walls, floors and ceilings. By the way, this technology is currently applied in Germany for low-height housing construction and in Singapore to build 30-40-storey residential and commercial buildings.
In honor of launching new manufacture technology, the factory team of modular house-building factory ModeX laid «time capsule» in foundation of the enterprise. The message of BI Group holding personnel is addressed to those, who will read it in 25 years, in golden jubilee of BI Group company. More specifically, therein the following is said: «We believe, that succeeding generations of Kazakhstan people will be proud of results of our labor for the sake of Kazakhstan nation. We build happiness for future generation!»